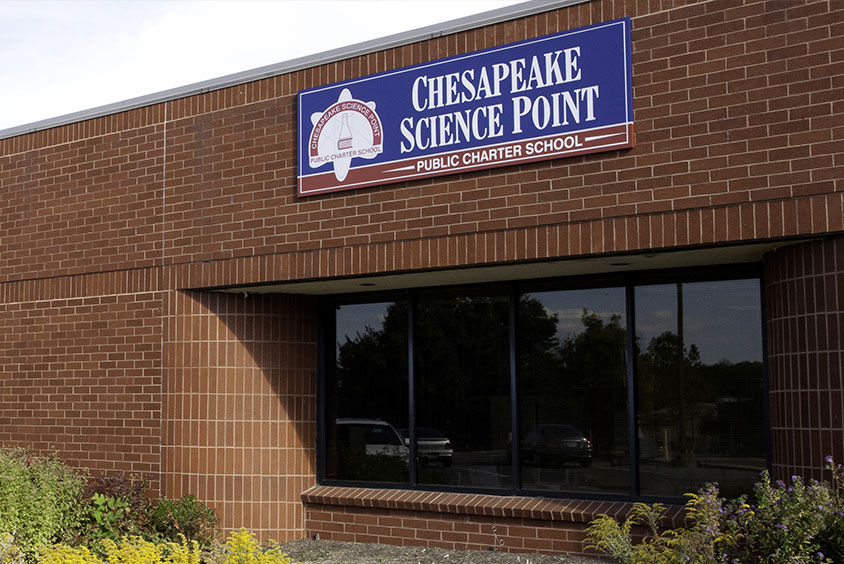 Designing a school presents several unique challenges: working under limited budgets, securing construction approval from both the county and the local board of education, and meeting standards for fresh air, cooling, classroom, and hallway space. This process can take up to three years to complete, but charter school Chesapeake Science Point had only eight months. Arium helped Chesapeake deliver on this goal, taking a creative approach to converting an old government office building into a school while simultaneously anticipating and meeting all code requirements and engineering challenges.

Chesapeake Science Point, an Anne Arundel County, Maryland, STEM-focused charter middle school has been a major success, piling up accolades since its founding in 2005: students have exceeded state averages in national test scores, and Washington Post columnist Jay Matthews listed it as one of the top 30 middle schools in the entire Maryland, Washington, D.C., and Northern Virginia region for the 2006–2007 school year. Chesapeake intended to build on this early success by expanding to add grades 9–12 in 2009, until it became clear that the current facility could not accommodate the addition of a high school.

Short on time, and working with limited public funds, the Chesapeake Science Point team needed to locate a space that could be repurposed as a school for grades 6–12. They settled on a red brick, one-story building on Parkway Drive, adjacent to an office park off Route 100 in Columbia, Maryland. The building had once served as a branch office for the Army Corps of Engineers. From the imposing security fence outside to the cluttered office areas inside, it hardly resembled a student-friendly environment.

Chesapeake had just eight months to overhaul the space by the August start of the school year. They needed an architect who was efficient, adaptable, and capable of successfully navigating the building permit and code requirements for Anne Arundel County. School administrators asked for recommendations, and the response was overwhelming: "We reached out to everyone," said Mehmet Gurbuz, Chesapeake's principal. "We spoke with parents throughout our diverse student body, as well as colleagues from the district. Almost everyone pointed out Arium."

"They knew more than I ever would have expected. Everything from the floor design to the hallway space, they addressed in the first meeting."

Everyone the project team spoke to recommended Arium as the right architect to design the new Chesapeake Science Point for one major reason: the firm's track record in meeting mechanical, electrical, and plumbing standards in multiple counties in the Mid-Atlantic region, including the firm's proven ability to expedite the building permit approval process. Most important for Chesapeake, Arium had experience creatively repurposing existing buildings, and an impeccable track record of delivering projects on time.

Although Arium came highly recommended, Chesapeake administrators still came into the first meeting with a skeptical attitude. It generally takes a year or more to build a school space even in an existing building, and it was difficult for Chesapeake to envision the tangled mess of offices on Parkway Drive being converted into a sufficient learning environment while passing the building and school board certification process within eight months. Arium rose to the challenge and immediately addressed these concerns. 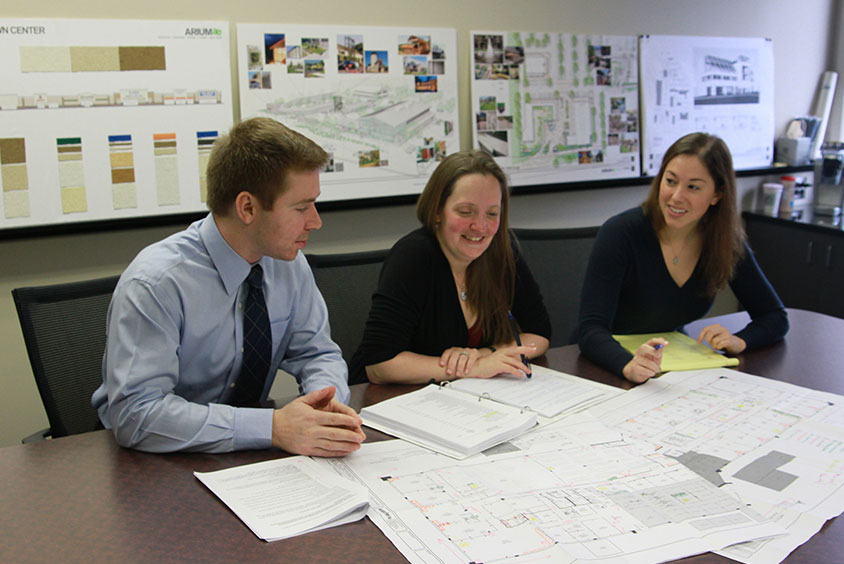 The firm's focus within the Mid-Atlantic region ensures Arium provides exceptional architecture and MEP design services across a broad range of project types.

Arium is uniquely suited for projects like Chesapeake Science Point due to the firm's integrated design approach that emphasizes cross training and communication across architecture, engineering, and interior design disciplines. With mechanical and electrical engineers on staff, Arium's designs stay grounded in what can be feasibly implemented within budget and on schedule. Architects and engineers learn from each other, and as a result, Arium project teams are well versed in building codes and compliance issues in counties across the Mid-Atlantic region. The wealth of experience within their integrated studio made Arium a better choice for the Chesapeake Science Point project than other firms.

"Sometimes, a designer will sell somebody on the fact that they've done 500 schools," said Scott Walthour, Principal at Arium and head of the firm's engineering practice, "but they won't know anything about permitting within a particular county, so you can literally have months of delays in the process because the designer doesn't know that particular county."

The Parkway Drive office building location for Chesapeake Science Point presented a major challenge; it needed creative problem solving in order to function as a school in the time frame allotted. The outdated and compartmentalized nature of the existing interior meant Arium had to demolish most of the interior. "The only thing we saved in the interior was the columns. We tore everything else out," said Stephanie Bounds Nunn, project architect for Arium. "There were very few windows, so we had to add new openings wherever possible."

In addition to creating viable classrooms, Arium went to great lengths to reuse the existing mechanical and electrical equipment in order to meet Chesapeake's budget. Systems had to be repurposed to meet Anne Arundel County, Maryland, requirements for adequate fresh air and cooling. In addition, the Arium team worked to provide extra soundproofing to meet special requirements for buildings situated near the Baltimore/Washington International Thurgood Marshall Airport and at the same time improve the acoustics within the classrooms.

Before they could implement any of these changes, however, Arium had to quickly secure approval for the space plan from the Anne Arundel County Inspections and Permits Department, as well as the Board of Education, to leave sufficient time for construction. Arium received approval in a remarkable three months, primarily by communicating closely with the County and the Board and ensuring that each part of the space plan conformed to their requirements before submission. Despite this early approval, however, county officials were still doubtful that the building would be ready in August.

"The inspectors who visited couldn't conceive of us building the school in time, and how we were going to take a 40,000 square foot building and get it up to code and standards," said Spear Lancaster, governing board president for Chesapeake. "They're used to how people built things in the 1970s."

With so much work being conducted in so little time, the sheer amount of coordination on the project had the potential to cause confusion, but under Arium's integrated process, architects and engineers were aware of all the potential obstacles and were able to address the concerns of the client and contractor immediately.

"Every time we had a question, we would call Arium and get an answer," said Lancaster. "They didn't treat us like rookie newcomers, even though they could have, and every time we met with them, it yielded information that pleased the district and the state."

On Time and Above Expectations

Ultimately, the building was completed one week before the beginning of the school year. Given the time frame and the unconventional space to work with, Chesapeake Science Point administrators would have been happy with something that was merely functional, but the school community was surprised with what Arium was able to do with the space. 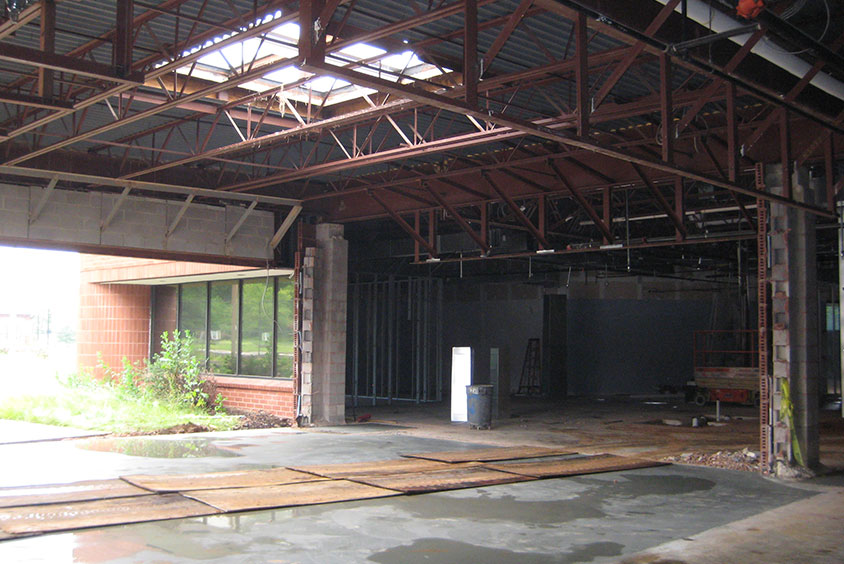 In order to meet the demanding needs of an educational environment, the majority of the existing building's interior was removed.

The interior includes several creative design flourishes that distinguish Chesapeake from its peers. Typically, Maryland public schools require a colored stripe to run through the corridors, but Arium took it a step further and added five separate accents delineated by subject area: a green stripe for chemistry classrooms, blue for computer science areas. Each classroom also has a colored block right inside the doorway, which dovetails perfectly into the school's attendance policy: if you aren't on or past the block by the class start time, then you are late.

"The parents who first see the building from the outside are amazed that a school can exist inside. When they see the interior, they get really happy." 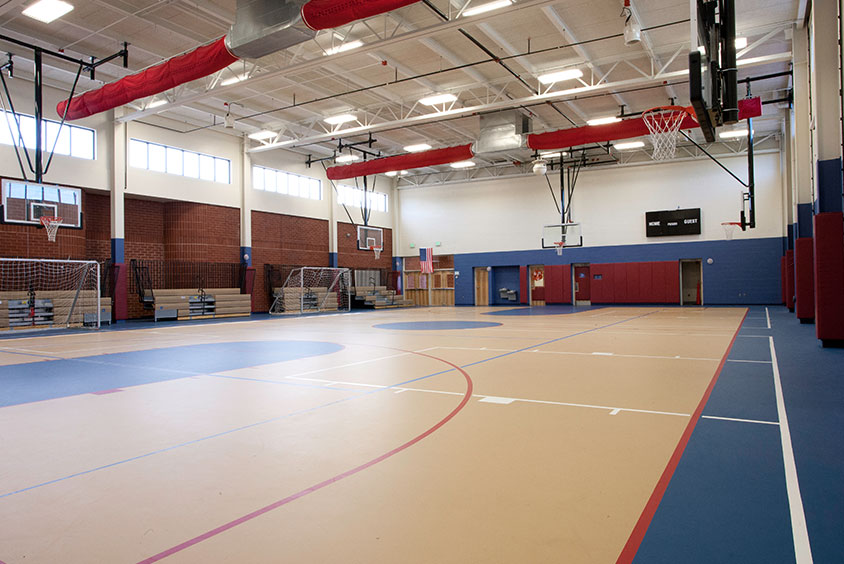 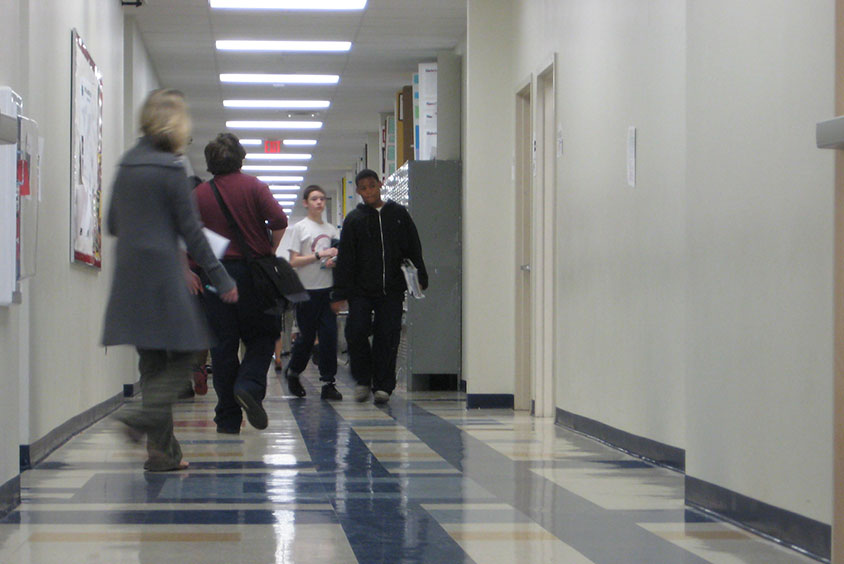 A gymnasium addition to the building to be added later was conceived and carefully planned for during the initial project stages. Within a year of moving into the new facility, Chesapeake contracted with Arium to complete the new addition.
Arium used interior finishes that not only conformed to Maryland public school requirements, but also reinforced Chesapeake's attendance policy and departmental organization.

Arium was also able to maximize the space limitations without compromising the learning environment. All of the rooms that are rectangular and symmetrical serve as classrooms, while the more angular spaces were utilized for the teacher's lounges, the nurse's office, and the media center. Thoughtful design even reached a few unexpected places. Arium's project team wanted to retain the building's original bathrooms for budget reasons, but ultimately, due to the functionality of the space plan, had to tear them apart and rebuild them entirely. Gurbuz jokes that "we had no vision for the restrooms, but people even enjoy that part of our school now."

However, there was one remaining issue left unresolved in the initial construction of the school. Every public high school requires a gym, and although Chesapeake intended to add a high school, the expansion wasn't approved in time for the initial building process. Arium left a space available on the site that could be developed into a gym in the future. Fortunately, Chesapeake secured approval to add grades 9 - 12 within a year of moving into the space, and immediately contracted Arium to complete the gymnasium addition.

Secure in its new building, Chesapeake Science Point continues to flourish at all levels: it has one of the best math and science teams in the state, and its students regularly score in the 90th percentile in state proficiency tests in math and reading. The school serves a 55 percent minority population from a wide variety of socio-economic backgrounds, working to ensure that every student graduates and moves on to higher education. School administrators maintain that the key to their success is a dedicated school community:

"We have what I call 'the magic triangle'," said Spear Lancaster. "Parents, teachers, and students are all committed."

The success of Chesapeake Science Point shows the potential of every space to be converted into something special. In an unassuming building, surrounded by an old government security fence in an isolated office park area, some of the best education in the state is happening.

for more information on this project, or to discuss your particular project needs, please contact Stephanie Bounds Nunn at stephanie@ariumae.com or 410.730.2300. 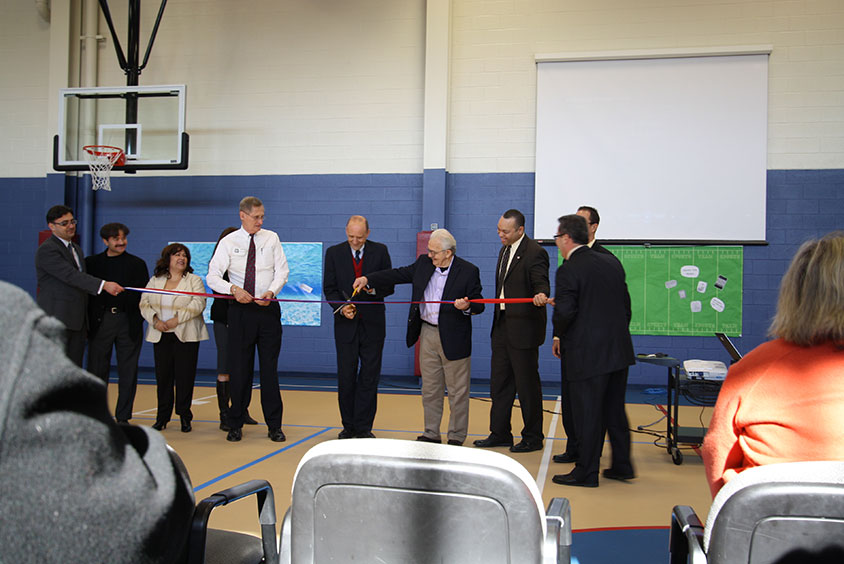 Arium helped Chesapeake defy all odds and meet what many would consider an impossible schedule.

Download a PDF of this article by clicking here.